I have traveled to China twice with groups led by Jesse Tsao. Both trips were wonderful. In 2017, we spent the last weekend in Wuhan. I’m not sure I’d ever even heard of the city before that trip—I certainly didn’t know anything about it. I have only the best memories of it now.

We visited the marvelous Yellow Crane Tower, which is set on a hilltop and surrounded by a beautiful public park.

We visited a huge lake, also set in a beautiful park—the Chinese do not skimp on parks!

But the best thing was Tai Chi in the middle of the city. On Saturday morning we walked to a nearby mid-town park which was, like all the city parks we saw in China, full of people dancing, walking, working out, playing games and—what we were looking for—doing tai chi.

We had no plan, no appointment, nothing set up in advance. We just went to the park. And there we found the lovely Master Tan, dean of martial arts for this whole city of 11 million!

She led us through 24, the 108, Laojia, and a couple of qigong routines I wasn’t familiar with. It was thrilling. We agreed to meet again the next morning.

Sunday morning, in addition to everything we did on Saturday, she demonstrated Wudang Tai Chi sword for us. The whole encounter was unforgettable.

On our last night in China, several of us went walking in a long, wide pedestrian mall not far from our hotel. There is no crime in Wuhan; we were assured we would be perfectly safe, and it certainly felt that way. Safe and relaxed. Throngs of people strolled and shopped into the evening hours, and we joined them, feeling what it might be like to live in China, in Wuhan. I loved it.

Thirty-two-step Sword, also called the simplified sword form, is a short routine for Tai Chi straight sword that was developed in the 1950s, around the same time as the 24-step simplified taijiquan. Li Tianji was the master who created this form.

Purely Yang in style, 32 is a shortened and somewhat rearranged version of the longer traditional Yang Sword form. All of the movements in 32-sword are drawn from Yang Sword, though some of them are executed somewhat differently.

I first learned 32-sword from my friend Long Feng, then relearned it with Hu Pei Yi, an excellent instructor from Jiangyin. I was learning yet again from Frank Lee when the pandemic intervened. Over the winter (of 2020), I studied an excellent tutorial by Li Deyin.

The tutorial is an hour and forty minutes long and it’s in Chinese, though as I have pointed out before, his demonstrations are so clear that you can understand a lot without words. Also, with a modest vocabulary for sword and the list of names, you can follow more of what he says than you might have thought. I especially like Professor Li’s back-view demonstration at 1:28.

Though simple enough to be learned easily the first time, 32 is both subtle enough and robust enough to reward frequent practice and ongoing study. It employs most of the major sword fighting techniques found in Yang sword, yet it takes only three to four minutes to perform.

There are two lists of names, which I have combined. The modern names specify the footwork (or stance) and the sword technique employed. The traditional names indicate the movements in Yang Sword from which the 32-steps have been derived. 起势,Qǐshì (Beginning) and 收势,Shōu shì (Close form) are not included in the 32 steps. Here is my combined list: 32-sword-list (PDF)

Kung Fu Fan is one of two fan forms created by Li Deyin in the early two thousands. Both are popular and widely practiced, at least in China and among Chinese people living here, and both are usually performed to a piece of music also called Kung Fu Fan.

Here is Master Faye Yip performing Kung Fu Fan. She is Li Deyin’s daughter, and I think of her as the gold standard for both of his fan forms.

In an earlier video, Master Faye performs Kung Fu Fan with a group of students at a workshop in Madrid.

Most of the movements in Kung Fu Fan are based on traditional tai chi forms, especially sword forms, with the fan substituting for the sword. In the list I’ve got, the names of the movements are followed by the name of the traditional movement in parenthesis. Here’s the list: (PDF) kungfu fan

I’ve found a two-part, two-hour instructional video by Li himself. It’s in Chinese but as usual, he presents it so clearly, with such ample demonstration, that you can learn without understanding what he’s saying (though I wish I could!). The captions that appear on the screen match the list in the PDF above.

Just for fun, and not to be missed, check out a couple of WOW renditions of the same form in tournament play:

Kung Fu Fan is an entertaining piece to watch, fun to perform, not to mention good exercise in practice.  It works very well as an ensemble piece for as many people as you can fit on the stage. It’s not that hard to learn, at least well enough to perform in the back row, so a lot of people get to be in on the act. 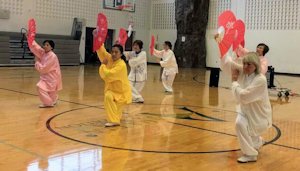 My weekend practice group has performed with as many as seven people, in settings as diverse as Chinese New Year parties, community centers, and nursing homes. Above, Long Feng, Hu Peiyi and I (L-R front row) perform Kung Fu Fan  for a senior lunch at the Gus Garcia Community Center in Austin in 2018.

Just got back from China. I traveled with a group (fewer than twenty) from all over the US plus four from London. Our leader was Jesse Tsao, wonderful Tai Chi master and teacher (taichihealthways.com). We saw some amazing sights on a three-day Yangtze River Cruise and four-day tour of Wudang Mountain.

The view from the Golden Summit

There’s a school half-way up the mountain, next to the hotel where we stayed. We visited with the master, who told us (Jesse interpreting) about the history and philosophy of his school, and who kindly gave us each a signed copy of a little book. I can make neither heads nor tails of it, but I will surely treasure it. Must figure out what it is.

Yu Xu Palace, which I have seen in so many videos, surprised me. It always looked to me as though it was set in a vast remote plain. There are no plains to be had in that part of China, however, and Yu Xu is in fact right in the middle of Wudangshan village (武当山, Wǔdāngshān). The interior of the Yu Xu Palace was closed for renovation, so we saw only the famous courtyard. Loved it.

I did some Chen on the mountain.

As far as tai chi is concerned, we had several amazing sessions with Jesse. Most fascinating to me was a comparison of the first sections of the four traditional long forms (Yang, Chen, Sun and Wu). I had never understood how closely the first part of the Yang 108 parallels the first part of Laojia.

On the last two mornings, we found a group at a park in Wuhan. Master Tan led us through the traditional Yang-style long form and 24; then we did a qigong routine that was new to me. She called it shí bā shì (十八式, 18-forms) Tai Chi Qigong (太极气功, Tàijí qìgōng). I found a video and a list of the names of the movements. Nice routine. Master Tan’s recording, like the track to the video, includes cues for breathing. 呼吸 hūxī is breathe; hū  is exhale and xī  is inhale. 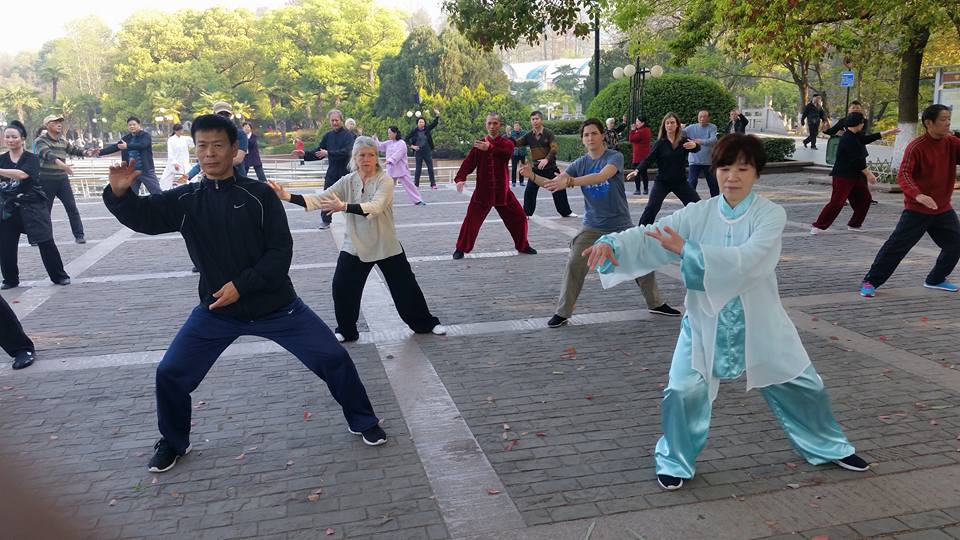 We also did a Beijing-style silk-reeling Chen routine that blew me away, but I don’t have any idea how to find it on the Internet. Still looking for that one.

During a recent spell of bad weather, I was looking for Tai Chi that I could practice in a small space, inside. Of course, Ba Duan Jin and Nei Kung are good for that. But also, silk reeling exercises are an excellent workout, especially for the legs, as well as good practice for improving all of the Chen empty-hand forms.

An article in Wikipedia explains the principle that gives this kind of exercise its name, Chán sī jīng (纏絲精). Chan means winding or spiraling, and si means silk or thread.

“The name derives from the twisting and spiraling movements of the silkworm larva as it wraps itself in its cocoon [and the action of reeling the silk for thread]. In order to draw out the silk successfully the action must be smooth and consistent without jerking or changing direction sharply. Too fast, the silk breaks, too slow, it sticks to itself and becomes tangled.”

Chen Xiaowang  lectures and demonstrates at length (45 minutes) in his video on silk reeling. English subtitles help, though I’m sure we miss a lot not understanding the Chinese. It would take a lot of patience to work through this video; I confess I haven’t done it. Yet.

For a great crash course, Jesse Tsao demonstrates a number of silk reeling variations in a short clip on YouTube from his full-length video on silk reeling, available on his Taichihealthways website.  The full video is excellent, well worth the small cost. I have a number of his instructional videos, and they’re good—all in English, too. 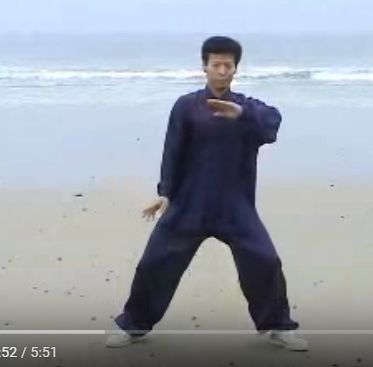 Here are eight variations I used from those Master Tsao demonstrates:

I have a new book out! I am fortunate to have made quite a few friends in my neighborhood who are Chinese and practice Tai Chi. I’ve been meeting with them on weekends for three years now.

Most speak no English (they are older people visiting grown children in the US), which is why I am trying to learn Chinese. Among those who do speak English, I have come to know Lily Blackard, who is Chinese, born in Vietnam, and now a naturalized American citizen.

As soon as Lily learned that I was a writer, she asked me if I would write the story of how she came to this country as a Vietnam War refugee. I jumped at the chance, both to learn more about her experience and to revisit that era in our history.

The result is a small volume (a little more than a hundred pages) that combines Lily’s story, as she remembers it from forty to fifty years ago, with a general history of the war and its aftermath. I was doubly fortunate that a wonderful watercolorist and friend, JU Salvant, offered to illustrate the book.

Red Sky in the Morning is available in print and as an ebook from Amazon. The print edition is expensive but beautiful because of the paintings, which include a gorgeous cover of red sky and sea. The ebook is a bargain, as it contains full-color illustrations as well (though some older Kindles might display only black and white).

If you read it and like it, please consider leaving a review on Amazon! The paintings are available as high-quality prints on heavy watercolor paper from JUSalvant.com.