Continuing with the Hung Gar Tiger Crane Set. After Poison Hands and Iron Body is the Leopard Section. I have three videos to work with: 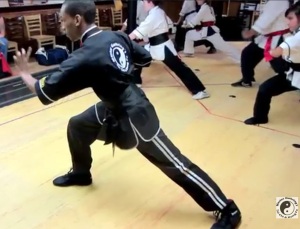 The names of the movements are as follows:

REPEAT ALL on the other side. Then:

Finally, for review, here is a demonstration by Head Instructor Hunter of the first three sections, at a walk-through pace. We haven’t yet learned the Five Animal Salute that you see at the beginning and end.