Old Frame Chen Tai Chi, second routine, is my official new project for 2015 (though between us, what I really want and plan to learn is more sword). Here’s Chen Bing–impressive.

I found two great websites with information about the Chen forms:

Absolute Tai Chi offers an excellent Syllabus page with links to videos and lists of the names of the movements for the major Chen forms. The Chicago school Curriculum page offers these resources, too. Both schools seem to follow the teachings of Chen Xiaowang, whose videos I’ve been using.

I was excited to see that both curricula include sword and broadsword (Dao). The latter is the same one we learned–with names in Chinese. The sword form is the same but, wow, different. And names for the sword, which we’ve never had. More to come on both of these! 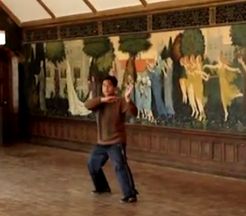 In addition the Chicago website includes the Chen 38, though not the same one taught by Cheng Jincai. Differences here are substantial, based on the names; I haven’t looked into the video resources on that one yet.

Anyway, this is enough Tai Chi to occupy me for the next few years. And we’re starting with Laojia Erlu. I note that the London school cautions against excessive practice of Erlu alone because it can be wearing on the body.

So of course the two lists of movements for Laojia Erlu are slightly different. However, they both start off with the same movements up to the second Buddha Stamp, and these opening movements are all familiar from the Chen 38.

The first four (disregarding Yubei and Qishi) are also the opening to the 38, but each movement is styled quite differently–seemingly more simply. The London and Chicago lists for Erlu then agree up to a second Buddha Stamp.

That’s the first minute and a half of a three and a half minute form, but it’s only eight of more than forty movements. In other words, it start out slow and gets very fast!

WHAT IS TAI CHI?