Starting after Bend Bow Shoot Tiger at the end of section one, I’m following the instructional video by Li De Yin.

10. Resting stance, carry fan (Xie bu dai shan). The traditional name is Gǔ Shù Pán Gēn, or Uproot the Old Tree, a name that also occurs in double saber, where it’s a 360 turn and a chop down. The breakdown:

It doesn’t sound like either of these fan movements is a strike, and in the demo, they don’t look like strikes, but Gu Shu Pan Gen is a chop down, so maybe they’re based on a striking movement (down). Basically, the saber and fan movements of the same name are not very similar! I can’t see it.

Dian bu is new to me. I would have called in xu bu. Same thing? Seems to be. I recently learned that xu bu can be either toe or heel down, so maybe this just specifies that it’s xu bu with the toe.

Start with the wrists crossed, fan held in front of the chest, open the arms in a big circle so they meet overhead and circle the wrist that holds the fan, Fold the fan down to the chest again. The key here is not to be lazy (as I sometimes am), but to get the fan all the way up there.

Circling way up there over the head. This is Professor Li’s wife demonstrating.

13. Bow stance, cut down (Gong bu xia jie). The traditional name is Yan Zi Chao Shui, or Swallow Touches Water (small swallow, actually), a name from sword form that invokes the image of a swallow skimming the surface of the water. The breakdown:

14. Embrace fan snap kick (Bao shan dan ti). The traditional name is Huai Zhong Bao Yue, or Embrace the Moon, which is familiar from sword form as the posture of standing on one leg, embracing the sword, which is pointed upward. I notice that in the demo, the kick can be held momentarily, pointing up (for those who can do that). The breakdown:

15. Bow stance, push fan (Gong bu tui shan). The traditional name is Shun Shui Tui Zhou, Push Boat with Current. This one caught me by surprise! I was looking up each character when I recognized where it was going. This move is in every sword form. I didn’t recognize it in the fan version, because the fan is vertical, not pointing away as the sword would be. The breakdown:

16. Chop [with] fan, stretch palm forward (Pi shan tan zhang). The traditional name is Bai She Tu Xin, or White Snake Spits Out its Tongue. The breakdown is:

17. Dance flowers, hit fan (Wu hua ji shan). This is a movement I was particularly interested in getting clear about. I find it a bit tricky!

The traditional name is Wu Song Tuo Kao, or Wu Song Breaks the Handcuffs. This is a movement in Kung Fu; here’s an interesting article from KungFuMagazine.com. Wu Song is a character in a traditional Chinese novel. The short version (which I got from Pan Huai) is that (handsome) Wu Song discovered that his short elder brother’s beautiful wife had an affair with a rich man, so Wu Song killed her. He was arrested, but broke the manacles and escaped to live a Robin-Hood life with bandits.

The breakdown on the fan version of breaking the handcuffs is as follows (translations dicey!):

Based on what Long Feng as shown me and slow motion vdieo, it looks like this: 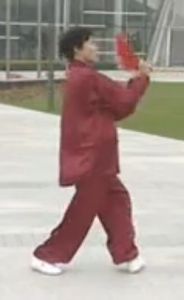 Step left and circle the fan shut toward you.

Stepping right, turning to the right before facing front to snap the fan open.

Best bet for learning this move (unless you have someone to show you): watch Faye Li Yip in Scotland, using the gear symbol at the bottom of the video screen to set the speed at .25, and watch at about 1:23.