This completes the sequence for 56-Sword, following the demo by Fan Xue Ping. After xu bu dian jian, at about 4:30, she withdraws the sword, then steps up to bing bu ping ci (White Ape Presents the Fruit). From there she begins another retreating sequence.

As she steps back, first with the right, she points the sword down (above). She retreats two more steps, left, right, each time pulling the sword back to her waist on the side to which she has stepped, left hand on the wrist. 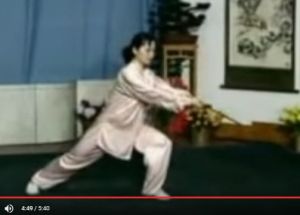 Then she pivots on the right foot and does gong bu xia ci to the right front corner, as shown above. From there she does phoenix Spreads Wings, wheels the sword back on the left and chops down, as shown below.

She does another run of deng jiao, qian ci, tiao bu, ping ci. This is the third one in the form, and except for the direction she’s facing, I see no difference between them. From ping ci, she wheels the sword around on the left, dipping fairly low:

Then wheeling to the right, she dips with the right crossed in front of the left, as shown here:

She then steps left and right, lifting the sword (liao jian). From there she pulls back to the position shown below. 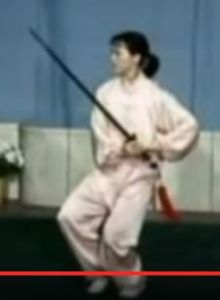 From there, she steps in a circle just as if to close 32-sword (Xieng zhuan ping me). But instead of the straight stab, she does bing bu ping ci and reaches under for the sword, as we do in closing Tai Chi Wudang Sword.

We’re done! I now know the sequence well enough to follow Long Feng and to practice on my own. However, I haven’t got complete lists of the names, poetic and descriptive, plus I would like to compare this form to Yang sword (which I don’t know very well). So I still have a lot to learn.