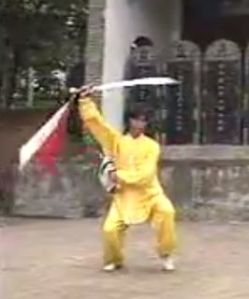 Next is 全舞花朝阳刀,  Quán Wǔ Huā Cháo Yáng Dāo: The Whole Flowery Circling Broadswords and the Sun-facing Broadsword (I’m taking the English from the Master Cai video). I would have called this three moves, as follows.

(1.) Feet: From the position above, step left, step around right, step across in front with the left, and step out diagonally with the right. Blades: Slash right, left, circle left overhead (now your arms are closed, sabers crossed left on top), and open the sabers. You’re here: 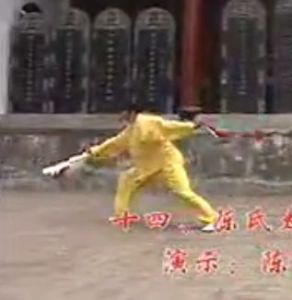 That last flourish, where the left dao flashes up and then returns to the hidden position, is an added touch of flower; it does not occur in either of these videos I’m using. Master Gohring calls it “cleaning the blade,” but the blades do not actually touch. You could add this flourish nearly anywhere that Sun-Facing Broadsword occurs.

When Chen Zhenglei does this “washing the blade” movement, he circles the head a second time with each blade. I notice that he adds this, or doesn’t, randomly from one repetition (of the same move) to the next, so I conclude that it’s optional flower.

Next is Broadsword Faces the Sun After Cutting Three Times. One move is repeated three times, then followed by another move to reach Sun-Facing Broadsword, as follows.

Feet for cutting three times: Step left, then right, turning the right foot in, and step across behind with the left. In class, we call this “jump to kneeling” and give it a little leap. Blades: Slash right so both arms are crossed (right on top) and open out. Master Cai says the left blade blocks up, the right down. Finishing position is like this:

Above, that’s Master Cai (Master Cai Instructional Video); Chen Su Yang is moving so fast I can’t even grab this position in slow motion! Master Cai gives the other side, too (this is a great video!)–click on the image below for a better look:

Then swivel to the left, step right, step across behind with the left to repeat. And repeat again, for a total of three cutting turns. Swivel–or as Master Cai says, make the feet rub the ground! It looks like he’s pivoting on the left toe and right heel.

Master Cai does not jump on these turns; he glides through them. But he does jump into the Sun-Facing Broadsword. Swivel the last time, then jump around with the right and step back with the left. The blade slashes right, so the arms are closed as they would be for a fourth round of cutting, but instead of opening up, the right saber circles the head to finish here: 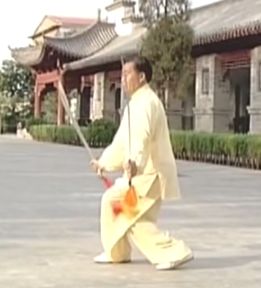 On this one, the blade slashes left, then right (while the left circles over the head). The right circles overhead and the two blades cross in front at the same time as left foot crosses over. In the ending position above the two swords are not vertical but oblique.

Seriously, it is well worth wading 25 minutes into this video. So slow and clearly broken down! One more small discrepancy in technique: we do not touch sabers in this sequence; Master Cai does. The sabers clang against each other, crossed, as they open for the xie bu sit.