I’m looking at YouTube, searching for video (other than our own school’s) on the Yang saber form that I will be performing for Chinese New Year. No luck, really, but I’ve found some interesting material. The closest thing to our form is this one by Peter Tam Hoy (see my October post on this form). But the most interesting discovery today is an instructional video from TaiChiHealthways.

Mostly, he is working on the double jump kick. I have always thought the “punch” after the kick was just that: Jin bu ban lan chui. But I knew it was called Hit the Tiger Form. Light bulb moment for me! He is not punching, he is doing Hit the Tiger Left–Zuo Da Hu Shi!

Other Yang forms are all so different, but it’s helpful to see how the various performers move. Amin Wu (whom I admire no end) does an unfamiliar Yang saber form:

This might be a modern form–it is called 36-form saber. And I couldn’t help noticing that she has also done a video of a short, unfamiliar fan form–36-fan. Lovely:

Possibly the best thing I found, though, is a video on Chen Saber, also from TaiCHiHealthways.com, which includes instruction and names of movements. 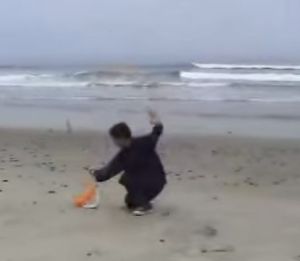 Like the Yang saber video, it doesn’t cover the whole form, but what it does cover is great. The two videos from TaiChiHealthways are samples–Master Tsao offers a huge variety of instructional DVDs, covering most of the forms I have studied and/or plan to study, both traditional and modern. Wow. Might have to get one.