Above, Sing May Chen performs Chang’e (Moon Goddess) Flies to the Moon. The form is also called 42-step Fan.

I first learned this form from a friend from Beijing who used to join my neighborhood practice group on the weekends. When I learn a new form, I always want to know the correct names of the movements. In this case, arriving at a list was a challenge. I started with the list at the beginning of a video. But I couldn’t just copy the text, because all I had was an image. 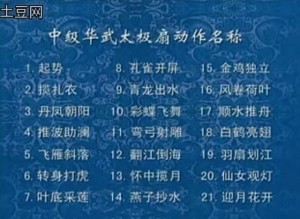 I found a (somewhat loosely translated) English list. Using that, the voiceover of the video, Google translate, and the MDBG online dictionary (which allows me to draw a character if I can get the order of the brushstrokes right), I have arrived at a list of the moves.

Here is a printable list of the names of the 42 movements: huawufan [PDF]

There are actually two forms: a primary level form and a mid-level form. It is the latter that I practice. Huá means flowery or magnificent; Wǔ means martial. The Chinese names of the forms are:

Zhongji Hua Wu Shan is a combined form, with elements of the four main styles (Yang, Chen, Wu and Sun). The opening to this form is clearly Sun-style.

A couple of names of movements are particularly interesting. #4, 推波助澜 Tuī Bō Zhù Lán, Push the Waves even Higher, is a saying that means something like the English “Add fuel to the fire.”  #29, 贵妃醉酒 Guìfēi zuìjiǔ (sounds like gway fay djway joe), The Drunken Beauty, is the name of a well-known Qing Dynasty Beijing opera.

And here she is, the Drunken Beauty, reeling away in Huawu fan:

That is Master Zeng’s daughter in back view; here’s the video: https://www.youtube.com/watch?v=RCK2lLQlIqA

Like many other fan forms, this one includes a number of names familiar from sword forms, with the fan movements mimicking swordplay. And where the sword forms feature Xianren, the Immortal, the fan form names Xiannu, the Spirit Woman.