I am brushing up on Chen sword and trying to figure out the names of the movements, of which there are 49–the form is also known as si shi jiu shi taiji jian. My school does Chen sword the way Grandmaster Cheng Jincai teaches it. Most of the material I am looking at online is the version practiced by Chen Zhenglei, Chen Bing, and Chen Ziqiang. 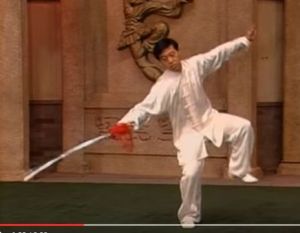 These three videos are helpful. The first, Chen Bing’s, is great but distractingly, when I view it, it’s displayed in widescreen that it was not intended for, so it’s distorted. Maybe that’s just the way I’m viewing it? Can’t figure out how to fix that.

The second video is Chen Zhenglei. Excellent, clear. The third is Chen Ziqiang, and it is a full instructional video with subtitles. Very helpful, though the subtitles and voiceover are not very well coordinated with the video (the name shown is not always the move he’s demonstrating).

These versions of the form differ from the one I’ve learned in several ways that I’ll note as I go along, but also the openings (Qishi) are different–we simply step left. All three of these masters start with a more typical Chen-style opening step (ca bu).

I have found several lists of names, with a few variations, and differently divided into sections. I’ve referred to all of them to settle on the names I’ll use. The lists are:

The first movement is Chao Yang– Face the Sun. For us, this is a simple movement, holding the sword at chest level in front. Next, Xian Ren Zhi Lu –Immortal Points the Way–is easily recognizable below:

Next, we present the sword, turn in place, take the sword and stand on one leg, stabbing down; then stab level to the left. This is Qing Long Chu Shui–Bluegreen Dragon Emerges from the Water; See Chen Zhenglei at the top of this post doing this move.

The slicing back and forth movement that follows is Hu Xi Jian–Protect the Knees. We do only R/L/R and we stay in place. The move varies according to the number of slices and also because some (Chen Ziqiang for example) travel forward doing this move.

Turn to the left and raise the sword as pictured above. This move is called Bi Men Shi–Close the Door–but it can also be called Tiao Lian, or Raise the Screen, a move familiar from Yang sword forms.

Next, Qing Long Chu Shui–Bluegreen Dragon Emerges from the Water again, but a little different. Just a level stab. This is followed by turning and chopping back. That move is called Fan Shen Xia Pi Jian–Turn Back and Chop Down.

Turn back, stamp the foot and stab level. This is Qing Long Zhuan Shen–Bluegreen Dragon Turns its Body. Next, Xie Fei Shi–Slant Flying. In Chen Bing’s list of names, this is the end of the first section.