The next full minute of the form consists of ten moves straight out of 32-sword, so maybe this is a good time to review. The movements all have both descriptive and traditional (or poetic) names. Which I’d like to hook up. My translations of the descriptive terms leave much to be desired. I don’t really care—why translate? Why not use the Chinese names? 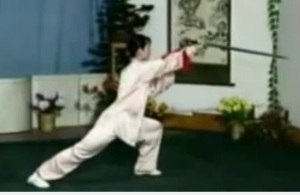 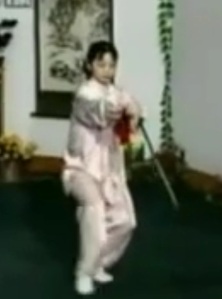 I notice that a couple of transitions in this section are not what I’m used to. Fan Xue Ping stoops into xie bu ya jian (resting stance press the sword down) after Fan shen hui pi. Then, from Xu bu dian jian, she pulls the sword straight back up. I am accustomed to going straight from Fan shen hui pi to Xu bu dian jian, then wheeling the sword into xie bu ya jian. I am talking about this position being before or after pointing the sword in empty stance: 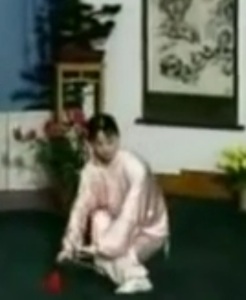