I studied the first three verses of the Meng Fok video until I thought I could do them, then fell into a state of complete confusion when I tried to follow Long Feng. Took me a while to figure out what all the differences were between her form and Meng Fok’s.

When Meng Fok takes the sword, she steps right and left, pivots, and then steps left to stab overhead. Long Feng steps right, left, right, shifts left and stabs up, like so: 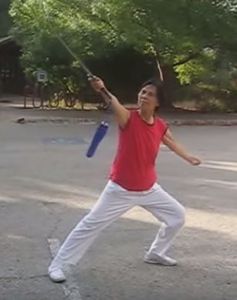 They are oriented differently. Meng Fok stabs to the back right corner, Long Feng to the front left corner.  I’m going to do this form Long Feng’s way.

The last line of verse two is also different, even though they start and finish in similar positions. In line 4, Meng Fok takes four steps, Long Feng takes only three (RLR). Somehow, they both unwind to this position (except Long Feng is in a deeper xie bu): 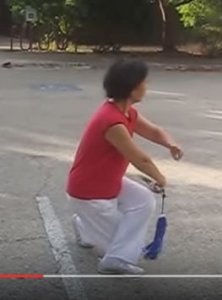 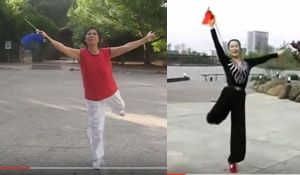 They both wheel the sword and finish in the same position, like so: 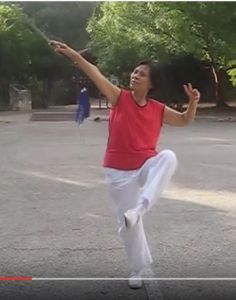 That’s as far as I’ve gotten, so I’m not even quite as far along as I thought I was a couple of weeks ago. To be continued!