Yi Jian Mei (One Plum Blossom) is the title of a drama set in pre-revolutionary China.  Apparently there is more than one version and production—a 1931 movie? A Taiwanese TV show in the 1980s, apparently. A TV show popular in China in 2010? And the popular theme song was composed when? I would have to be able to read Chinese to get to the bottom of it.

I have been reading the Inspector Chen novels set in post-Tiananmen Shanghai. Qiu Xiaolong describes a nostalgia among the new generation for the glory days of Shanghai in the 1930s. I’ve just started his internationally best-selling book of short stories spanning the decades between those days and the present. His next Chen mystery, Shanghai Redemption, is coming soon. Nice covers! Macmillan/Minotaur. 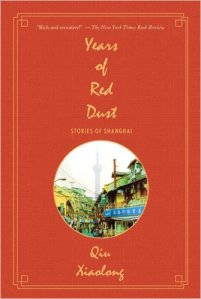 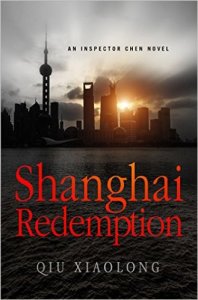 Anyway, I’m learning the Tai Chi sword form to the popular theme song, currently working on the sequence of movements for the first two verses (4 lines each) using a video by Meng Fok. I had gotten as far as the middle of the second verse. To recap, Verse 1: 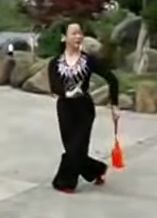 Line three: I have to break this line into two phrases. Jiu zai zui leng: She swings the sword in a big counterclockwise circle on the left of her body while stepping up with the right foot. Then she closes with the left foot in a sort of bing bu dian jian, except her legs are straight and her left hand is in a high ward-off position: 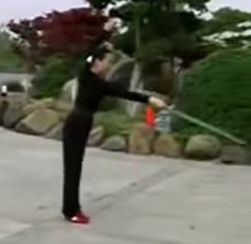 Line 3, second phrase, zhi tou zhan fang: She circles the sword as if to do you gong bu lan, but follows through to reach the pose below in a sort of du li ping ci:

The last line is hard! Kan jian chun tian zou xiang ni wo: 8 words for 8 counts. First four counts: She turns to her right and steps R-L-R-L, turning around. The last step left is a cross-step behind. The sword is just following her, but she switches from palm up to palm down as she turns. This is right about at the one-minute mark of the video (1:00-1:02). She’s here: 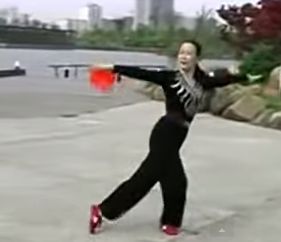 Now she unwinds all the way around so she is in cross stance with the right foot behind as shown below. That’s pivot on L toe, pivot on R heel, pivot on L heel, pivot on R toe. The sword traces one big circle overhead with a small circle in the middle, changing from palm down to palm-up. Finish like this: 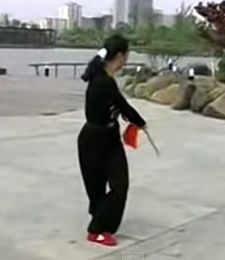 Verse two ends at 1:06. A little more than two minutes remain, but I think maybe the repeated part (verse 3 and the 2 lines after it) repeats in movement as well. That would be cool.