This section (which starts at about 1:45 on the YouTube video) includes the two xie bu and, between them, three moves that are straight out of 32-sword. This section also includes an optional flourish in the middle of the wheeling movement, gong bu gua pi.

33. Xie bu ya jian: Press Down in Resting Stance. From the Xia Ci, shift left and slice left. The left hand circles in, then around to press down on the sword in xie bu (right foot in front).

34. Xu bu dian jian: The charming traditional name for this move is Heavenly Horse Flies Across Sky. Stand up on the right leg, step left to right xu bu. Just like 32-sword. 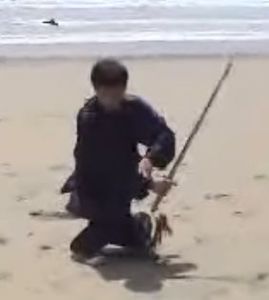 35. Du li tuo jia: Lift Curtain on One Leg. Also straight out of 32-sword. Block to the left, circle down in a squat (shown above), turn and stand up on the right leg. In du li shown below, the left hand touches the arm and the sword is parallel to the ground.

36. Gong bu gua pi: Cutting in Bow Stance. The simplest version of this move is to wheel the sword left and step straight into the finishing position shown below. 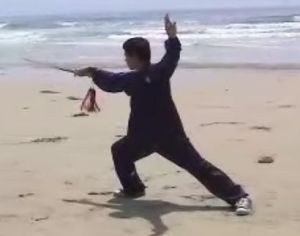 Optional flourish: Wheel the sword first left (on left foot), then right (on right foot), and leap to the position shown below.

The leap (which is between 1:55 and 2:00 on the video) is from right foot to left foot, and the right crosses behind the left, as shown above. From there, unwind and chop down to the finishing position. 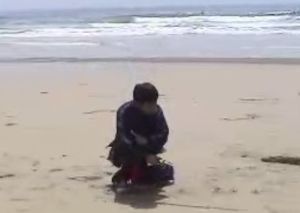 37. Xie bu hou jian: Thrust Backward in Resting Stance.Draw the sword back to take this position. For the second xie bu the right foot crosses behind, and instead of pressing down on the sword, stab backward (hou means back) as shown. 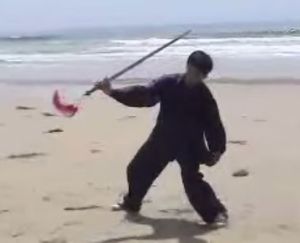 38. Cha bu yun zhan: Cut Flat in Cross Stance. Step out to the right, sword following (palm up), then shift back to the left to circle the sword in front of the face (yun), as shown above, and chop to the right (zhan). Finish palm down, in cha bu (right foot crossed behind), left warding off high, sword pointing up (below). 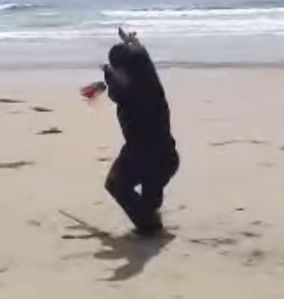