Lesson two begins from Zuo Ping Dai, a left bow stance with left hand high and sword stabbing level. These first two lessons cover about the first 35 seconds of the YouTube video, a low-quality excerpt from the instructional video.

6. Fen jiao ling jian: Shift back and turn the left toe out. Step in and block high with the left, drop the sword handle into a counterclockwise circle outside the left hand. Block up with the sword, circle in with the left across the chest. The kick is a toe kick (not a heel kick as I once imagined). Ling means lead. The descriptive name he gives is Point Toe and Lead with Sword. After the kick, step down (onto left) and pull down on the handle to circle behind clockwise. Make a figure-eight, circling the sword counterclockwise in front.

Cha bu is the back cross stance

7. Cha bu fan liao: Cha bu is the crossing stance pictured above. Fan liao means the sword is raised backwards. He gives the name as Back Slash in Cross Stance. 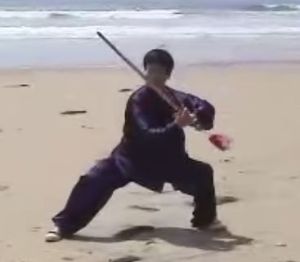 8. Ma bu yun bao: From cha bu, the left foot pivots on the toe, the right foot pivots on the heel, to reach ma bu (horse stance) as pictured above. The sword swings from pointing backwards to the right all the way around over the head to the position shown. Yun is cloud (the circle over the head), bao is embrace (note the rounded arms above). This horse stance is shifted to the left.

9. Ding bu jie jian: Jie is cut. Cut Down in T-Stance. Flip the sword over and cut down on the left. For me, this movement is improved with the knowledge that the ma bu is shifted left. That way, the step up to ding bu is more pronounced. Also, that flip is accomplished by leading the hilt in a tight counterclockwise circle. The cut is along the left thigh.

10. Fan shen beng jian: Beng jian is a new concept for me. Master Tsao in this lesson gives a good look at how the wrist flips to snap the sword around. His sword visibly flexes with this sharp movement. Beng means collapse (outside of its use in describing sword play); the sword snaps back to rest more or less upright in the hand, which is like a collapse or a folding up or cocking movement. The wrist rotates from palm down to palm up. Master Tsao uses the word “flick”–Turn Body to Flick Sword.

11. Gong bu xia ci: Both hands are on the sword handle for the downward stab. Between the fan shen and the gong bu, there’s a little pivot on the left foot so the posture faces stage-left. The traditional name is Cat Catches rat.

12. Du li shang ci: The arms open up (this is a ward-off) and then circle into the shang ci. A correction for me: don’t try to keep the left hand on the sword handle; it slides back on the right forearm, which allows the sword to extend more. The footwork is to step left, then right. The traditional name is Birds Return to the Tree at Dusk.