The more I learn about the sword forms (and I have barely scratched the surface) the more I begin to recognize moves that recur, often styled differently, but nevertheless, familiar.

I’m glad I learned 32-sword first. It’s the simplest sword form (meaning the shortest), but it contains elements that are like stepping stones. Going into the third minute of the 49-step Wudang sword form, I recognize the part of 32-sword that includes the Compass. 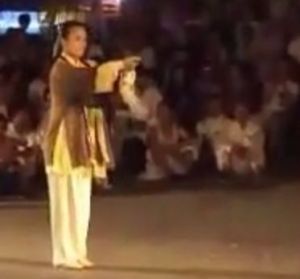 The Compass: sword held out with both hands

Starting from the right bow stance following the jump and squat, at 2:00 (times refer to Liang video), shift back to left, rocking onto right heel, sword point up. Then step around and back with the right, turning 180 degrees and slashing the sword around to the right. Lift into:

The Compass comes at 2:15. That circling of the sword in front of the face is like a move we learned in Chen sword. You throw the head back. We could call this one Cut Off Nose to Spite Face. Blocking a stab to the face?

My favorite move follows: step left and lift the right knee while flicking the foot and sword up (see below). Land on the right and step around left right, pivoting on the right to make a full circle. Then run: right left skip to right bow stance and stab just before 2:30. 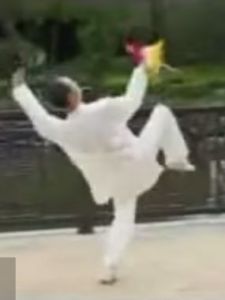 The sword circles four times: tight following the flick, around on the turn, tight to change direction, and then in a large circle to wind up for the stab. Withdraw the sword and sit in cross stance facing front, with the sword pointing to the front.